Despite a variety of efforts aimed at reducing drunk driving, such as the National Highway Traffic Safety Administration’s “Drive Sober or Get Pulled Over” campaign, the number of alcohol-impaired driving fatalities has remained relatively consistent over the past decade.

According to the National Highway Traffic Safety Administration (NHTSA), 10,511 people were killed in drunk-driving accidents in 2018, representing 29 percent of all driving fatalities.

Nationwide, it is illegal for drivers to have a blood-alcohol content (BAC) exceeding 0.08 g/dL. However, in 2018, 19 percent of the drivers involved in fatal crashes had a BAC of at least 0.08 and these drivers were often repeated offenders.

Alcohol-impaired drivers involved in fatal accidents were more likely than other drivers to have previous DWI convictions, speeding convictions, and license suspensions or revocations. Drunk drivers are not the only ones affected by the decision to drive while impaired. In fact, in 2018, only 61 percent of the alcohol-related traffic fatalities were the drunk drivers themselves.

Instead, 13 percent were passengers in the same vehicle, 15 percent were occupants in other vehicles, and 11 percent were nonoccupants such as pedestrians and cyclists. Roughly 10 percent of these alcohol-related traffic fatalities were children under the age of 14.

While drunk driving is a nationwide problem, some individual states struggle more than others. For example, in Texas, 40 percent of traffic deaths involve an impaired driver; nationally, that number is 29 percent.

Over the past five years, Texas accounted for 13.8 percent of all drunk-driving fatalities in the U.S., despite accounting for only 8.8 percent of the population.

Other states that are known for having high proportions of alcohol-related fatalities include Connecticut and North Dakota, both at 39 percent. Counties were ranked according to the percentage of fatalities between 2014 and 2018 that involved at least one driver having a blood-alcohol level exceeding 0.08 mg/dL, a level that is illegal in all 50 U.S. states. In the event of a tie, the county with the higher per capita rate of alcohol-related fatalities was ranked higher.

Texas is also disproportionately represented among small and midsize counties as well. Here are the counties with the largest share of traffic fatalities involving a drunk driver.

TRENDING
No matter what your situation is, we can help you find the right insurance policy for you. We’ve got you covered whether you are looking for teenager car insurance, car insurance for seniors, or single parent auto insurance.

DID YOU KNOW?
Finding car insurance with a bad driving record doesn’t have to cost a fortune. Keep in mind that very few people have a perfect driving record.

Fatalities per 100k residents were calculated as the sum of fatalities for 2014-2018 divided by the sum of the populations for the same years, multiplied by 100,000. Counties were ranked according to the percentage of fatalities that involved at least one driver having a blood-alcohol level exceeding 0.08 mg/dL, a level that is illegal in all 50 U.S. states. In the event of a tie, the county with the higher per capita rate of alcohol-related fatalities was ranked higher. 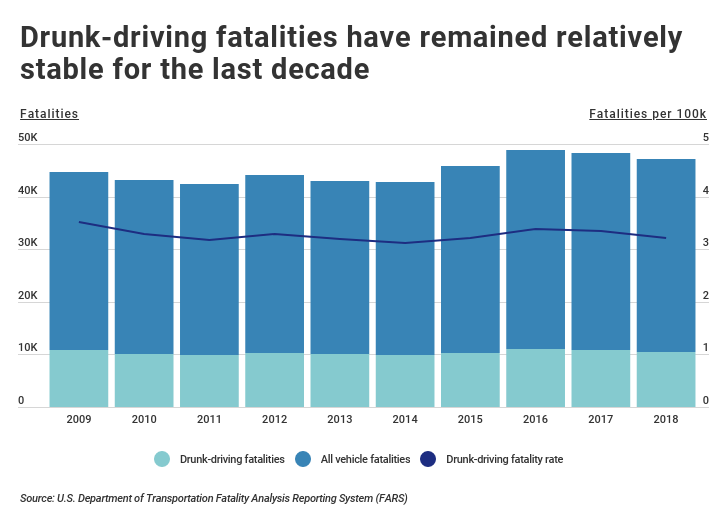 Aside from the death toll, the economic cost of drunk driving is also substantial. According to the NHTSA, the estimated economic cost of all alcohol-impaired crashes in the United States was $44 billion in 2010 (the most recent data available).

These costs include property damage, medical expenses, legal fees, and more. The NHTSA further estimates that the total value of “societal harm” (such as loss of quality-of-life) from alcohol-related traffic crashes for that same year would be $201.1 billion.

Many states are introducing new laws and technologies to keep drunk drivers off the road.

For example, several states have created zero-tolerance laws for drivers under the age of 21. To cut down on repeat offenses, some states are also using ignition interlocks for drivers who have already been convicted of drunk driving.

Furthermore, 37 states and the District of Columbia have implemented sobriety checkpoints, which are often used on highways during major holiday weekends like the Fourth of July or New Year’s Eve, when drinking is common and the likelihood of drunk driving is greater.

A combination of legislative action to discourage drunk driving, as well as greater public awareness of the dangers of drunk driving, suggest that alcohol-related fatality rates could decline in the years ahead.