Top Reasons Drivers Get Pulled Over [And What Happens]

According to the U.S. Census Bureau, there are more than 217 million vehicles driving on American roads today. While advances in safety technology make driving far less dangerous now than it was in decades past, the National Highway Traffic Safety Administration (NHTSA) reports that in 2017 there were 37,133 fatalities as a result of motor vehicle crashes.

While safety technologies in automobiles – for example, seat belts, airbags, and impact resistance – largely focus on lowering injury and fatality rates when a collision occurs, law enforcement officials work to prevent collisions in the first place by identifying drivers who make dangerous decisions on the road, such as disobeying traffic laws, operating an unsafe vehicle, or driving erratically.

However, certain demographics are more likely to be pulled over than others, and the consequences for drivers who are subject to a traffic stop vary significantly.

According to the Department of Justice, there are 19 million traffic stops per year. The data shows that African Americans are more likely than other racial groups to be pulled over, with 9.8 percent of black drivers experiencing a traffic stop annually.

The data also shows that women are less likely than men to be pulled over. In addition, 18-24-year-old drivers are the most likely age group to have a police-initiated traffic stop, with the likelihood steadily decreasing with age. Since drivers under the age of 25 are less experienced behind the wheel, they often also pay higher insurance rates. Not all drivers who are pulled over believe that their stop was justified. In fact, only 80.6 percent of all traffic stops are perceived by drivers to have a legitimate cause.

While black drivers and white drivers have similar results from traffic stops, Hispanics are more likely than other races to get a ticket and less likely to get a warning. Hispanics are also the least likely racial group to have no enforcement action taken.

Since auto insurance rates are partially based on driving record, consequences such as getting a ticket or an arrest could also lead to higher premiums, raising the financial burden of driving for certain demographic groups. In recent years, a growing body of research has investigated the effectiveness of body cameras in police-initiated contact, such as traffic stops.

While there is currently no federal law governing the use of body cameras in police-community encounters like traffic stops, several state and local governments have passed legislation regarding their use in an effort to improve police and civilian safety, professionalism, and fairness.

To find the top reasons that drivers get pulled over, researchers at AutoInsuranceEZ.com analyzed data from the Department of Justice’s U.S. Bureau of Justice Statistics Police-Public Contact Survey. In addition to ranking the reasons by how often they occurred, the researchers also analyzed the most likely outcomes (warning, ticket, search/arrest, or no action) and the perceived legitimacy of each reason. Here’s what they found. 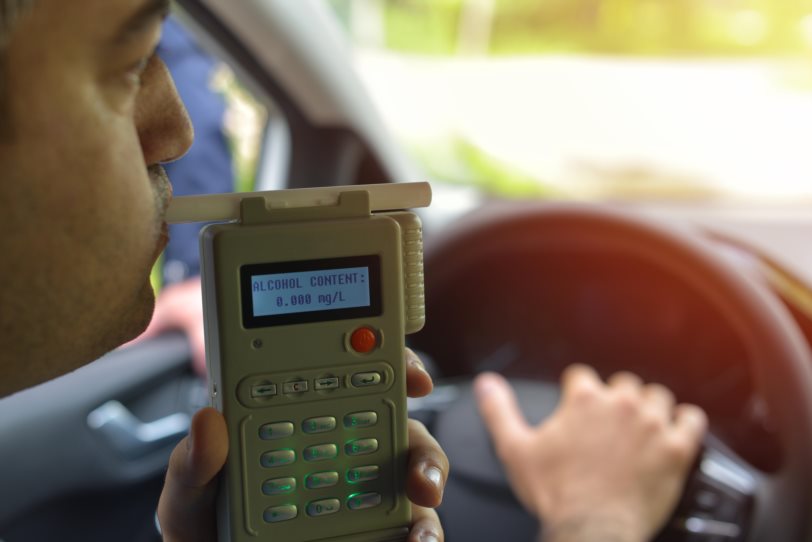 According to the NHTSA, 10,874 people were killed as a result of drunk driving collisions in 2017. This represents an average of one death every 48 minutes and accounted for 29 percent of all motor vehicle traffic fatalities in the United States during that year.

Across the U.S., it is illegal to operate a motor vehicle with a BAC of .08 or higher. Roadside sobriety checks aim to reduce the amount of drunk or drug-impaired drivers on the road. Police might pull over a driver who is driving erratically and require him or her to perform a roadside sobriety test, which usually consists of three parts:

Police will also often use a “sobriety checkpoint,” which is a predetermined location to stop vehicles at regular intervals and perform sobriety tests on the drivers. For about three out of four drivers, roadside sobriety checks will result in no enforcement action.

Using a cell phone while driving has become a dangerous and all-too-common form of distracted driving.

In 2017, 3,166 fatalities were the result of distracted driving, with 434 of them explicitly linked to the driver’s cell phone use. Despite the prevalence of cellular phones and the role they play in driver distraction, specific laws related to phone use while driving vary widely by state.

For example, some states ban all hand-held phone operation while driving. Other states allow drivers to hold a phone to talk, but ban text messaging. State restrictions on cell phone use by junior drivers also vary. When the police do not give a reason for a stop, only 36.7 percent of drivers perceive the stop to be legitimate.

Violators who are pulled over without knowing the reason are the most likely to be subject to search or arrest (14.5 percent). The percentage of stops resulting in an arrest when police do not give a reason is about four times higher than the national average.

At the same time, more than a third of drivers who are pulled over without knowing the reason receive no enforcement action.

Using a seat belt dramatically reduces the chance of injury in a collision. In 2017, seat belts saved an estimated 14,955 lives. However, only 89.6 percent of drivers buckle up.

Drivers can also be pulled over for multiple traffic violations at one time, such as speeding while not wearing a seat belt, or using a cell phone while running through a stop sign.

Compared to the averages for all traffic stops, drivers who are pulled over for multiple reasons are more than twice as likely to be subject to search of arrest.

Not surprisingly, drivers who do not follow the rules of the road are likely to be pulled over. Making an illegal turn (such as a U-turn where a sign forbidding it is posted) or illegal lane change (changing lanes without signaling) accounts for 6.8 percent of all traffic stops.

Drivers who make an illegal turn or lane change are slightly more likely to receive a warning than a citation with penalties. Only 8 percent will receive no enforcement action. 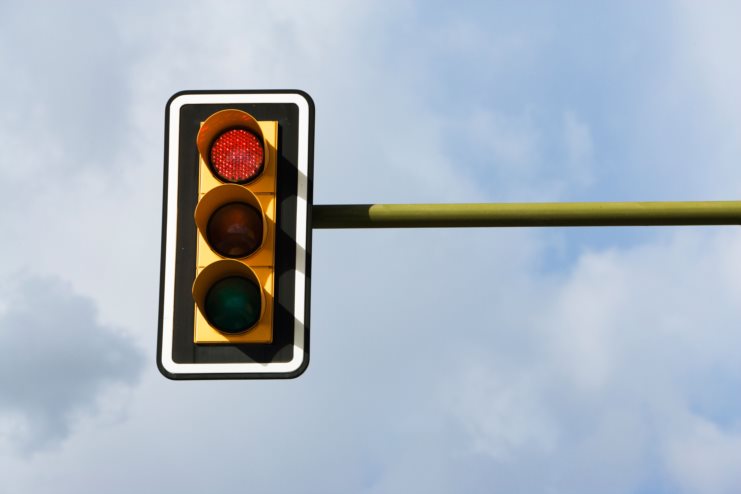 Driving past a stop sign without stopping or driving through a red light account for 7.3 percent of all traffic stops.

Almost every driver who is pulled over for a stop sign or light violation receives some form of enforcement action. More than half of violators receive a ticket (more than the average for all traffic stops), and 4 out of 10 receive a warning.

Drivers who are pulled over for a stop sign or red light violation are less likely to perceive the stop as legitimate when compared to the average of all traffic stops.

During a record check, a police officer will generally run the driver’s license through a computer database to view the driving record and also determine if the driver has any warrants for arrest. Nearly one in 10 traffic stops are due to a record check.

The most likely outcome for drivers who are pulled over for a record check is a warning. Compared to the national average, record checks are less likely to result in a ticket or search/arrest.

A vehicle defect occurs when there is an issue that prevents a car from operating safely, such as problems with acceleration, braking, steering, or signaling. Among all defects, broken tail lights, headlights, and turn signals are the most common causes for traffic stops.

Vehicle defect stops are much less likely to result in a ticket compared to all traffic stops. 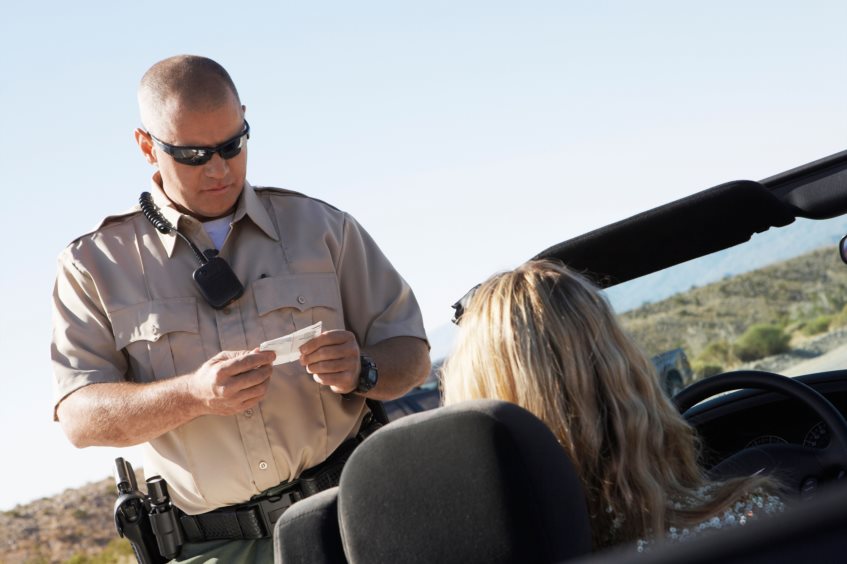 At 40.9 percent, speeding accounts for the most traffic stops in the U.S. Speeding is defined as driving faster than the posted speed limit on the road.

In 2017, speeding was responsible for 9,717 fatalities, roughly a quarter of all traffic fatalities that year.

Drivers who are pulled over for speeding are the most likely cohort to perceive their stop as being legitimate. Two-thirds of drivers who are caught speeding are issued a ticket, far more than the 48.8 percent average across all traffic stops.

The data in this report is from the most recent U.S. Bureau of Justice Statistics Police-Public Contact Survey. The top reasons drivers get pulled over were ordered by their share of all traffic stops in which police provided a reason. Traffic stops with uncategorized reasons were excluded from the final list.